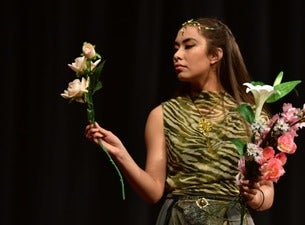 Shakespeare’s plays are full of ‘clichés and sayings’. They turn up everywhere! But as Hamlet said, “Words, words, words.” Those words need to be played. And that is exactly what thousands of students do each year, in spite of studying a Shakespeare play not being in the curriculum for some years. The journeys of discovery of quotable quotes, or interpreting his words which are less familiar, reveal why Shakespeare resonates so much today with these young people. For most, even the ending is unknown…and yet they ‘get’ the relationships, the parallels with what people say…be it their parents dictating or dictators pontificating. They use the scenes to challenge their opinions and thoughts - on money lenders, religious zealots, political liars and power hungry leaders.

Shakespeare Globe Centre New Zealand’s National University of Otago Sheilah Winn Shakespeare Festivals (SGCNZ UOSWSF, if you prefer a long acronym) provides audiences with the chance of being stimulated by the most outstanding 5- and 15-minute scenes from any of Shakespeare’s plays, one of each selected from all of SGCNZ’s 24 Regional Festivals nationwide. (A 3rd one may added if the Festival is very large.) Secondary students from Year 7-13 rise to the honour of treading the boards in Wellington’s prestigious Michael Fowler Centre over Queen’s Birthday weekend. This applies to the associated crews as well, with mentoring another key feature of SGCNZ’s objectives.

“The Festival gave me the opportunity to work in an incredible space and venue with industry professionals who provided an interesting opinion and constructive feedback on my style and decisions,” said Isaac Kirkwood, Orewa College following last year’s SGCNZ National UOSWSF.

With some containing Te Reo already having been registered in some regions, and mention of other ethnic influences, there is no limit to the settings, styles and shaping of the scenes to reflect the “imaginary forces” of these students from schools of all deciles and a growing number of home-schooled students.

“We need to ensure we continue to encourage our young people to be curious, collaborate and be creative,” says SGCNZ CEO Dawn Sanders, “surely a script for innovation and new inventions which society certainly seeks.”

In their 28th year, the Festivals are a fusion of art forms – theatre, dance, music, blended with cultures. However, “the play’s the thing”! Stay all day on Saturday and Sunday of Queen’s Birthday weekend, or pop in and be astounded at what is in store.