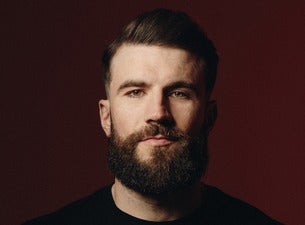 Country newcomer Sam Hunt has quickly made a name for himself writing songs for icons like Keith Urban and Kenney Chesney, but lately it's his solo work that fans are buzzing about. The former college football star cuts a stylish figure at his live shows, where his smooth voice and acoustic guitar strumming always get hearts pumping and feet moving. Whether he's crooning the catchy "Leave the Night On" or performing the song "Cop Car" that he wrote for Keith Urban, Hunt keeps the energy high and the tunes flowing at his must-see performances.

Georgia-born Sam Hunt was an accomplished athlete before making his mark as a country musician. A talented quarterback, Hunt was on the starting lineup of two universities and was even signed as a free agent with the Kansas City Chiefs before his love for music drew him to Nashville. He signed a publishing deal soon after landing there, and before long was working with some of the best country artists in the business. In 2012 he co-wrote Kenny Chesney's chart-topping hit "Come Over", establishing himself as one of the brightest rising talents in the business. In 2013 he made his solo debut with the single "Raised On It" before dropping a 15-track mixtape titled Between the Pines. The release contained "Leave the Night On", a Top 20 hit on the US Hot Country Songs chart. Since then he's penned hits for Keith Urban and Billy Currington, demonstrating a wide-ranging songwriting talent that has fans and critics alike calling him the next big thing in country music.