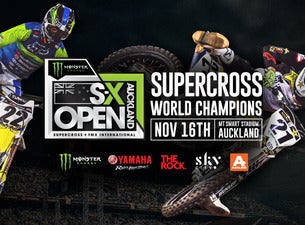 The largest ever international Supercross and off-road motorcycling event to hit New Zealand, the Monster Energy S-X Open Auckland is returning to Mt Smart Stadium on November 16 and promises to be even bigger!

There’ll be plenty of giveaways, autograph signings, live music, activations, demonstrations the free opportunity to learn to ride a motorbike in the Yamaha blU crU activation, and much much more in the Monster Energy Pit Party, free to all ticket holders and kicking off at 12pm!

The record-breaking success of the 2018 event was unprecedented, with a crowd of over 22,500 attending Auckland's Mt Smart Stadium, making it the biggest Supercross event to take place on Kiwi soil, and putting the country on the world Supercross map. 2019 will be massive, don't miss out!