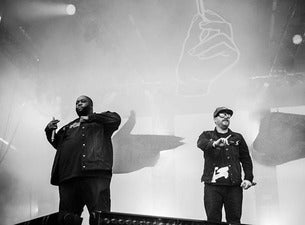 About Run the Jewels

RUN THE JEWELS IN CONCERT:

Underground hip hop supergroup Run the Jewels finished out 2014 as one of the year's biggest breakout acts, reaching both a critical and commercial high when their acclaimed sophomore album Run the Jewels 2 reached the Top 10 on the US Rap Albums chart. The record featured the unstoppable combination of producer El-P's insanely bombastic beats and rapper Killer Mike's deadly flow, and it served as a rally cry for hip hop lovers around the world looking for something fresh, new, and exciting. The duo's aggressive rhymes and next-level beats are even more impressive at their live shows, where they deliver take-no-prisoners cuts like "Get It" and "Oh My Darling Don't Cry" with a raw energy and effortless swagger that make good on all the hype. As they exit the stage after one of their epic performances, one thing is left abundantly clear: Run the Jewels are gunning for the hip hop crown, and there's nothing anyone can do to stop them.

Rapper Killer Mike and rapper/producer El-P first joined forces in 2012 when El-P produced Mike's sixth album R.A.P. Music. The record was a critical smash, landing on numerous year-end lists and leading the pair to form Run the Jewels the following year. They released their self-titled debut album online for free in 2013, generating significant buzz that they built on with their first live shows together. Following worldwide touring, the pair released their sophomore album Run the Jewels 2 in October of 2014, landing at No. 6 on the rap charts and No. 9 on the hip hop/R&B charts. The record's forward-looking sound and the duo's lightning-in-a-bottle live performances have both critics and fans hailing them as hip hop's next big thing, and ticket buyers lucky enough to catch them on tour will have no trouble seeing why.