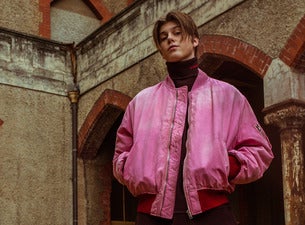 – Returns to New Zealand for his biggest show yet –

As the world continues to behold his commanding vocal talents, Australian phenom Ruel will celebrate the upcoming release of his highly anticipated sophomore EP Free Time by bringing his newly souped-up stage show to New Zealand this September.

Tickets go on sale at 9am Monday August 5.

My Live Nation members can secure tickets first during the exclusive pre-sale beginning 9am Friday August 2 until 8am Monday August 5.

Fans can also sign up to the Audience Republic pre-sale beginning 9am Friday August 2 until 8am Monday August 5.

In the middle of a hot streak for the ages, Ruel will stop by Shed 10 for one of the biggest shows of his career while displaying a huge step up in production from his hugely popular Painkiller tour earlier this year. On that run, Ruel became the youngest act to sell out a show at the iconic Sydney Opera House (he did it twice). He was also the youngest ever solo ARIA winner last year as his tune Dazed & Confused picked up the Breakthrough Artist award at the most recent ceremony.

Written in the midst of a rigorous global touring schedule that has included dates across Australia, Europe, Asia and America, Free Time is the second single from this EP, following Painkiller’s release in April. It will no doubt trigger a further flurry of streaming and add to Ruel’s already mind-blowing global total of 300 million, a figure propelled by a combined social media following of more than 1 million fans.

Still only 16 years of age, the young gunslinger first picked up the guitar at age 8 and, with the support of Grammy Award-winning producer M-Phazes, began taking his music more seriously at the age of 12.

It wasn’t long before his astonishing, soulful vocal talents began whipping up an industry frenzy, with a spot-on Triple J’s Like A Version cementing his bourgeoning reputation. From that point on it’s been strength to strength for this London-born legend, as he moves through the music world like a hot knife through butter.

His recent collaboration with Aussie hip-hop legends Hilltop Hoods has expanded his reach even further, with Ruel belting out their track Fire & Grace on the main stage at this year’s Splendour in the Grass Festival. He also recently performed at California’s legendary Coachella festival with British vocalist SG Lewis.

Looking to the future, Free Time arrives at the perfect time for Ruel as he positions himself for further domination. It displays a tantalising progression in song writing talents and complements his steadily building back catalogue to a tee. With beefed up production and meticulous attention to stage craft on show, Ruel’s latest tour will be a feast for the senses.