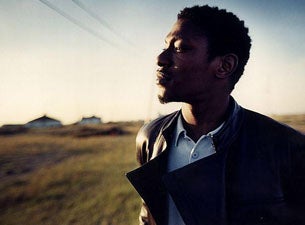 Back for the first time in four years, Niche Productions is proud to present Roots Manuva with special guests Thunderheist at The Palace Theatre on Thursday January 7 2010.

Releasing his fourth studio album ‘Slime & Reason' to rave reviews last year, Roots Manuva is heading back to Australia with his six piece band to wow audiences with tracks from the new album which gained rave reviews here and around the world including being Triple J's album of the week.

Mixing reggae, dub, hip hop and everything in between, Roots Manuva made his recording debut in 1994 which eventually led to signing with UK institution Ninja Tune's hip hop extension Big Dada and releasing his debut album ‘Brand New Second Hand' in 1999. ‘Brand New Second Hand' had an original distribution of only 3 000 copies but has gone on to sell over 60 000 copies worldwide. Since releasing his debut album, Roots Manuva has gone on to release a handful of studio and remix albums, toured the globe and not to mention collaborated with a mixed bag of artists including Chali 2NA, The Cinematic Orchestra, Gorillaz and Ninja Tune label mate Mr Scruff.

His second album 'Run Come Save Me' exceeded all expectations with lead single 'Witness' receiving high rotation on Triple J as well as being crowned as the number one UK hip hop track of all time by the UK's Hip Hop Connection magazine. Described by Music Week as "One of the UK's most consistent and engaging acts - whatever the genre", Roots Manuva is one of the most progressive artists in hip hop today with each album impressing fans more than the last. Be sure to keep an ear out for the remix and dub version of ‘Slime & Reason' due out in 2010. Also appearing on the night will be Canadian electro pop duo Thunderheist.

Comprising of Nigerian-born Isis on vocals and producer Grahm Zilla, Thunderheist played their debut performance in 2006, and released their self titled debut album earlier this year through Big Dada.
Don't miss this opportunity to see two of Big Dada's finest artists on the same stage together for the first time along with Melbourne special guests Thief and Eliza Wolfgramm.