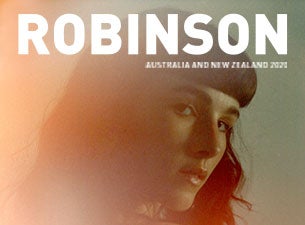 New Zealand-raised singer, songwriter and ultramodern pop practitioner ROBINSON today announces a headline tour of New Zealand in support of her forthcoming EP, “Watching You” out February 7. Her Gold certified Platinum single ‘Nothing To Regret’, which also went platinum in Australia, not only brought Robinson international acclaim but captured the attention and hearts of fans down under and across the ditch.

The New Zealand leg of the tour will begin at Ubar in Dunedin on Thursday, March 19, Blue Smoke in Christchurch on Friday, March 20 and the Tuning Fork in Auckland on Sunday, March 22. Robinson will be joined across all tour dates by Navvy.

Tickets for all shows go on sale at 1pm Thursday, January 16.

At only 23 years old, Robinson, aka Anna Robinson, has already amassed over 170 million streams, been nominated for two Vodafone NZ Music Awards, toured the UK, Europe and Australia and performed at SXSW in the US, with some killer support slots opening for Hayley Kiyoko and Dean Lewis.

Since 2015, Robinson has spent time writing and recording in studios throughout New Zealand, Australia, the UK, and the US with respected producers and songwriters like Fred Gibson (Ellie Goulding), Daniel Ledinsky, and Adam Argyle (James Bay, Ella Henderson). Robinson writes and sings to express feelings, experiences, and ideas that can’t be easily articulated in everyday conversation.

Robinson’s journey of self-expression and towards being comfortable in one’s own skin, is all there in the music. On her first release in 2016, with ‘Don't You Forget About Me’, a song that she describes being about “how I always felt like I needed to have something important to do, otherwise I didn't feel important: I need to wake up and know what I'm doing is worthwhile and that I've got a purpose.”

Robinson’s releases to date have been championed by everyone from NME, who described ‘Nothing To Regret’, a platinum hit back in New Zealand, as a “pop juggernaut”, to Clash, who praised Robinson’s song writing as being “remarkably mature, incredibly fresh”. In her anthemic ballad ‘Watching You’, Robinson sings of watching someone you love fall in love with somebody else; ‘Karma’, meanwhile, is a gold-plated revenge bop. To her most recently released track, ‘Don’t Say’, the first from her forthcoming EP “Watching You”, a dreamy pop track and heartfelt reflection on letting go of someone you once loved.

Joining her across all New Zealand tour dates will be fellow Kiwi singer/songwriter, Navvy. Auckland-raised singer songwriter Phoebe Lee Jasper, aka Navvy, is a fresh new talent whose electronic-pop stylings are packed full of joyful melodies, compelling rhythms and heartfelt declarations. Her sophisticated-yet-expressive take on synth-pop and vocal electronica is reminiscent to the sounds of La Roux and Robyn and is sure to get things warmed up each night before Robinson takes the stage.

Watch out New Zealand – Robinson is “coming for you” this March!