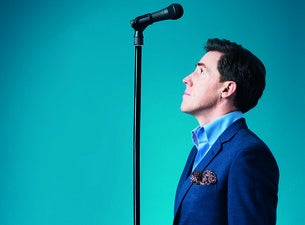 ROB BRYDON, charming Welshman, and cult comedy television superstar from hits The Trip, Gavin and Stacey and Would I Lie To You?, is bringing his brand new live show, I Am Standing Up, to New Zealand in April 2019.

Tickets for all shows go on sale at 2pm this Friday, July 20.

My Live Nation members can be among the first to secure tickets during the pre-sale commencing at midday Wednesday, July 18.

The Swansea-born radio and TV presenter got his big break in 2000 with Marion and Geoff, the series of short comedy monologues on BBC2. He is perhaps best known for his role of Bryn West in the sitcom Gavin & Stacey and the BBC One hit comedy panel show Would I Lie To You? His film credits include Swimming With Men, Early Man, The Huntsman: Winter’s War, Cinderella and Lock, Stock and Two Smoking Barrels.

But stand-up comedy is where Brydon is in his element – the perfect mix of charm and wry asides. Rob Brydon’s ad-libs, audience repartee and improvisations are a masterclass in clever comedy and he has been compared to the skill of the likes of Barry Humphries. A gifted impressionist, Rob woos his live crowds with uncanny impressions of everyone from Tom Jones, Bill Clinton, Michael Caine and even his The Trip co-star Steve Coogan.

In an often cynical, sometimes harsh world, Brydon delivers big hearted laughs and sell out runs on London’s West End. Don’t miss the chance to see why when one of the world’s best performs in New Zealand for the first time!

★★★★ “masterclass in light entertainment.” - The Telegraph

★★★★ “a master at giving an audience a good time.. it’s a delightful evening.” – The Times

“Worked the 1,500 seater like a music hall stalwart” – The York Press

“the hot towel of comedy: warm, cosy and refreshing.” – Chortle