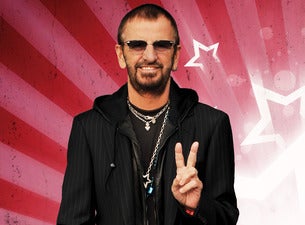 Ringo Starr and His All Starr Band Tickets

About Ringo Starr and His All Starr Band

RINGO STARR & HIS ALL STARR BAND IN CONCERT:

Count your lucky starrs, Ringo Starr & His All Starr band are on tour, bringing Beatles classics and the best of Ringo's solo material to fans around the country. The latest incarnation of the supergroup features yet another stellar lineup of musicians, including Toto's Steve Lukather on guitar, Santana's Gregg Rolie on keys, and Todd Rundgren on, well, just about everything. Covering a variety of contemporary and classic hits alongside beloved favorites by the Fab Four, the band has hordes of eager fans awaiting their 2014 tour dates.

Ringo Starr, beloved drummer of The Beatles, has been touring the world with his All Starr Band since 1989. Over the last two decades, Ringo has played with 12 variations of the band, always sharing the stage with members who are veritable stars in their own right. Past All Starr Band players include Joe Walsh of the Eagles, Peter Frampton, and Sheila E., and the ever-humble Ringo always gives his fellow performers equal stage time to perform hits from their respective catalogs.

"He played old classics from his solo career and Beatles, and plenty of other favorites from bands of our era. He is a true showman!"

"Ringo is a great emcee and performer. He is funny, down-to-earth, and obviously loves to perform — he was having lots of fun, and so were we. The musicians he brought along this time were fantastic..."

"People of all ages (kids to seniors) all dancing, cheering, clapping, laughing and singing together. I'm not sure I have ever seen anything quite like it. Incredible show & incredible talent."