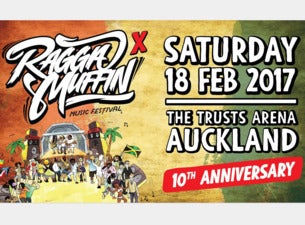 Raggamuffin is the largest reggae festival in the Southern Hemisphere. In recent years the festival has included urban and hip hop acts, but for the tenth anniversary it has returned to its reggae roots and sought out top artists to celebrate the milestone birthday.

Always a crowd favourite Shaggy returns to celebrate Raggamuffin’s tenth anniversary. Known for his Grammy Award winning album ‘Boombastic’, chart topping hits ‘Boombastic’, ‘It Wasn’t Me’, and ‘Angel’, Shaggy is a multi platinum selling pop reggae legend and one of the most requested acts on Raggamuffin’s Facebook page. Organisers of this year’s festival say he was an absolute first choice for Raggamuffin X.

Raggamuffin X wouldn’t be a reggae party without a Marley in there – and for the tenth anniversary Ky-Mani Marley with Gentleman will be playing, plus The Wailers featuring Family Man will keep the Marley vibes alive.

The ‘Royal Family’ of reggae, Morgan Heritage were crowd pleasers at Raggamuffin VII and return for the festival’s tenth anniversary concert on the back of their 2016 Grammy Award winning album (best reggae album) ‘Strictly Roots’.

Jamaican-born singer Etana has established herself as one of the most powerful and distinctive female voices in reggae. A hit at Raggamuffin VIII, she’s returning to please the crowds at Raggamuffin X.

Last year the Raggamuffin Village was expanded to offer more variety and for 2017, a second stage will be in the village offering additional music options including New Zealand bands Foundation and Common Unity, along with DJ Al’Goodie