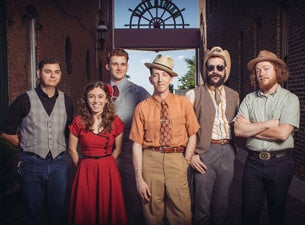 Pokey LaFarge makes a return to New Zealand in 2015 with a new album and new label.

Following on from his show-stealing performances at WOMAD and a sold-out tour of the country earlier this year American country-blues artist Pokey LaFarge is all set to make a return visit in 2015 for a series of North Island concerts along with his full band.

Recently signed to legendary label Rounder Records and with a new record in the works LaFarge's last series of dates here were his first in New Zealand and it's clear he's looking forward to heading back this way.

"I'm so honored to be making my return down under with our expanded band, new album, and new songs to share. And I must say, I enjoy bringing my middle American-landlocked music to an Island in the middle of the sea... For good people are found everywhere and music is for everyone-no matter who and where they be.”

His last shows here were a huge success and a masterclass in both stagecraft and musicianship as Pokey and his band wowed audiences with a live performance honed by years on the road playing major festivals, club dates and support slots with such international stars as Jack White, The Raconteurs and the Old Crow Medicine Show.

For his next visit he'll be touring with a 6-piece band (complete with a drummer) - all on the back of a new album that is already proving to be one of the most anticipated releases of 2015.

"Hands-down winner and crowd-pleaser of the weekend was Pokey LaFarge with his contemporary rejigging of vintage American styles (Western swing, country, old-time jazz) into laser-sharp and melodic songs" - Elsewhere.co.nz @ WOMAD

"The performer who’s ahead of the game right now" - Mojo