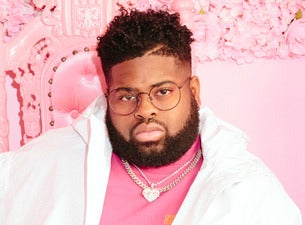 Like beautiful apple trees growing from the seeds of fallen Granny Smiths, so blossoms the first announcement of juicy side shows taken from this years’ perfectly ripe Falls Festival line-up!

Nicknamed after the attire he became known for wearing in recording studios, Pink Sweat$ is a singer songwriter who favours R&B ballads consisting of only his voice and guitar.

The popular R&B American singer-songwriter has racked up millions of streams with soft, acoustic ballads like honestly, which reached #23 on Spotify’s Global Viral Chart and #10 on Spotify’s US Viral Chart, and trialled over 2 million streams in under 8 weeks.

You won’t find any percussion in Pink Sweat$’ — in fact there is little more than a tranquil line on guitar and a series of harmonies, the track is like a demo that never got beefed up but somehow sneaked onto the streaming platform anyway. That fragility immediately marks it as an outlier, and that’s the point.