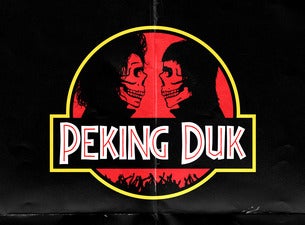 All bounce and zero boundaries, PEKING DUK gives you anthems for the good times, best enjoyed from the sweaty, heaving thick of it – which is exactly where Adam Hyde and Reuben Styles have come from. So, Auckland get ready, because the boys are headed your way to perform a one-off show at the Great Hall on Friday, February 21.

Tickets for all shows go on sale at 1pm Monday, January 20.

Vodafone customers can be among the first to secure tickets during the pre-sale starting at 12pm Wednesday, January 15. Go to vodafone.co.nz/music.

We loved them as a loose-unit electronic act, but the moment Adam and Reuben emerged from behind the decks and channelled their antics into the glorious shitstorm of energy that is a Peking Duk live show, was the moment Peking Duk became legend. Since their live debut at Splendour in the Grass 2016, the creative possibilities have exploded, and the boys are determined to go bolder with their offering, delivering new edits with a mix of spectacle, surprise and sheer insanity.

With an arsenal of summery future-classic bangers the sky ain't no limit. But no matter how high the Duks fly, they’ll always keep one foot in the sticky mosh from whence they came. Don’t miss Peking Duk LIVE on February 21 at the Great Hall in Auckland.