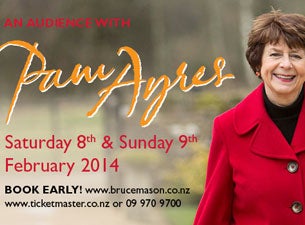 a fun-filled evening with...
PAM AYRES

Pam Ayres' return to Australia with her latest show coincides with the publication of her autobiography, The Necessary Aptitude. Since her first appearances on television over 35 years ago, Pam has been an audience favourite throughout the world for her observations on the comic details of everyday life, and for highlighting the absurdity lurking behind the mundane.   Pam's poetry books, CDs, and DVDs have sold in their millions over the years.   Pam has performed several times for HM The Queen, including a private performance at St. James's Palace in London, and was awarded the MBE in the Queen's Birthday Honours in 2004. Pam's show will include a selection of new poems and stories, as well as some audience favourites.  After the show Pam will sign copies of her autobiography. "If you get the chance to see PAM AYRES, do, don't think you're the wrong generation to appreciate it, trust me, there were all ages in that hall and no-one left that hall without sore ribs from laughing.   Anyone who can be on stage for 2 hours (one interval of 20 mins) at age 60 and have an entire theatre curled up in small, squeaking balls of glee deserves goddess status."  Sunday Mail