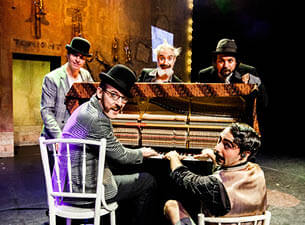 Flying violins! Speed skating ballerinos! Släpstick is an ode to the timeless comedy of Charlie Chaplin, the Marx Brothers, Spike Jones, and Laurel and Hardy. Described as “clowning glory in [a] mix of music and comedy” (Daily Mail), this production promises you and the kids an evening of laughs rooted in the slapstick tradition but with a very modern twist.

Based in the Netherlands, this company of five world-class performers have mastered more than 100 instruments between them to present “a feast for the eyes as well as the ears” (Fest Magazine). Zinging with energy and mischief, Släpstick is “a cavalcade of daftness that is superbly orchestrated and never misses a trick” (The Herald Scotland).