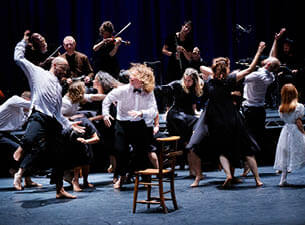 Surrender yourself to “90 minutes of ritualised ecstasy” (The Irish Times) as Michael Keegan-Dolan and Teaċ Daṁsa return to the Festival with a stunning new work.

Michael has a strong connection with this Festival, starting in 2008, with his productions of Giselle, Rian (2014) and Swan Lake/Loch na HeAla (2018).  In 2019 he got closer, with a six-week residency, Made in Wellington where Michael and his artistic collaborators began the creation of MÁM.

There was not a single seat left unsold at the recent World Premiere season at Dublin Theatre Festival, so get your tickets quick for this strictly limited run.