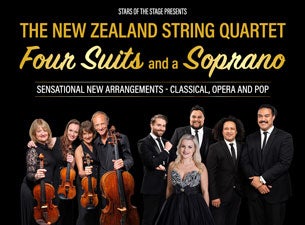 About NZ String Quartet, Four Suits and a Soprano

Live in Concert with

The concert tour will be a night of operatic classics from Nessun Dorma through to pop classics. So whether you’re a fan of the classics or a lover of pop’s high notes, there’s something for everyone in this night of magic.

Acclaimed performances in London's Wigmore Hall and the City of London Festival, in New York at the Frick Collection, and in Washington's Library of Congress Coolidge Auditorium have led to regular touring in the UK, Europe and North America.  The Quartet has also toured in Mexico, Curaçao, Japan, Korea, and China, and made many visits to Australia, including the Australian Festival of Chamber Music in Townsville and the Canberra International Music Festival.  Much-loved by audiences in New Zealand, the country's premier chamber ensemble presents a vast array of concerts in venues large and small all over the country each year.

A protégé of Dame Kiri Te Kanawa, Ipu’s passion for music came to light at the young age of 3 years - singing in the church, but his path narrowed toward classical music in his final year at Sacred Heart College in 2013. He is currently exploring the world of opera, and within the last couple of years has been a part of a number of classical groups such as the Auckland Chamber Choir and SOTO VOCE.

His soulful, dulcet tones have been described as being “smooth like caramel”.  Rutene is also a part of the Modern Māori Quartet whānau.

Outside of his busy performance schedule, Rutene also works as a director, producer, and vocal and performance coach. Rutene is a proud member and vocal coach of Te Kapa Haka of Whāngara-Mai-Tawhiti.

With his incredible voice and immense talent has been at the forefront of New Zealand music for over the past decade.

Chris is a graduate of the National Academy of Singing and Dramatic Art (NASDA) with a Bachelor of Performing Arts.