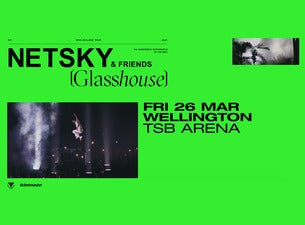 The secret is out. Honorary Kiwi and Belgian producer NETSKY has ticked off 2 weeks of quarantine, surprised fans at Gisborne’s Rhythm and Vines on the strike of midnight, and will now be turning his attention to taking his exciting new immersive [GLASSHOUSE] production on a New Zealand tour. Having released his critically acclaimed D&B album ‘Second Nature’ in October, Netsky has returned to his ‘second home’ to tour the new album and created an epic new show to go with it.

The [GLASSHOUSE] brings an exciting new visual element to NETSKY’s already high impact performances. In collaboration with Kiwi lighting and creative genius Ben Dalgleish from Human Person, the [GLASSHOUSE] prism features onstage with NETSKY and brings together a visual feast of neon, foliage, greenery and theatre that will take audiences to another level this summer.

The NETSKY & FRIENDS concept was debuted at one of Europe’s most epic music festivals TOMORROWLAND and see’s NETSKY curating eclectic line ups of some of his favourite producers and artists.

Global electronic music superstar and internationally renowned DJ and producer Boris Daenen, is as comfortable headlining stages at the world’s biggest festivals as he is behind the mixing desk in the studio and has wowed audiences across the globe from Coachella to Glastonbury to Pukkelpop. In 2017 he launched his ‘Netsky And Friends’ brand, curating and hosting his own stage at Tomorrowland, and continued to roll out this concept at festivals and clubs throughout Europe. As well as a legion of fans, Netsky has won a host of accolades; he was the youngest ever recipient of the Flemish culture Award for Music, and was voted the highest ranking Drum & Bass DJ in the DJ Mag Top 100. With three successful albums and a slew of A-List artist remixes already under his belt, Netsky signed to Republic Records in July 2018. Having worked for 6 months in the studio in Los Angeles with Multi-Grammy winning hitmaker producers Stargate (Rihanna, Jay Z, Coldplay), he released collaborations with David Guetta, Bazzi and Lil Wayne.

In 2020, Netsky took the drum & bass scene by storm with the announcement of his return to Hospital Records for a one-off project and his fourth studio album, ‘Second Nature’. The record marks the 10 year anniversary since his self-titled Hospital debut and was globally and critically acclaimed. Netsky will see in 2021 touring New Zealand and readying himself for more new releases, and a return to live shows around the world.