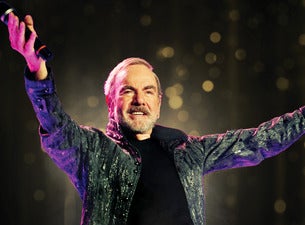 The countdown to one of the biggest tours of 2015 is on!

In just over two weeks, music legend, Neil Diamond, will be bringing his world acclaimed live show to Auckland!

Fans can expect to hear all the classics from his songbook of hits, including Cherry Cherry, Holly Holy, Cracklin’ Rosie, Song Sung Blue, You Don’t Bring Me Flowers, Solitary Man, Sweet Caroline, Love on the Rocks, Desiree and Shilo - as well as songs from his latest studio album, Melody Road.

The demand for tickets to Neil’s shows has been phenomenal.   With only a few remaining tickets for his first show in Auckland on Monday October 19th, fans will be delighted to hear that there is now an opportunity to purchase newly available tickets in all price categories for the second Auckland show on Wednesday October 21st.  This includes a limited release of previously unavailable promoter holds in great locations.

The final release of tickets are on sale now through www.ticketmaster.co.nz

*** Tickets for Neil’s Auckland shows are available from www.ticketmaster.co.nz ***

*** Tickets for Neil’s Dunedin show are available from www.ticketdirect.co.nz ***

VIP Packages are available through www.daintygroup.com/neildiamond-nz

Throughout an illustrious and wide-ranging musical career, Neil Diamond has charted 37 Top 40 singles and 16 Top 10 albums in the U.S. and internationally.  A Grammy Award-winning artist, Diamond is a member of the Rock and Roll Hall of Fame, the Songwriters Hall of Fame and a recipient of the Sammy Cahn Lifetime Achievement Award, one of the highest honours bestowed upon songwriters.  Diamond’s many other achievements include a Golden Globe Award, 13 Grammy nominations and 2009’s NARAS’s MusiCares Person of the Year award.  In 2011, Diamond received the prestigious Kennedy Center Honor for his lifetime of contributions to American culture.