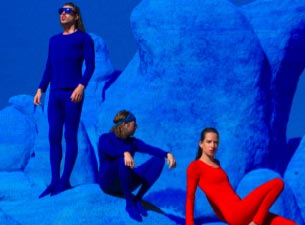 Amsterdam-based Dutch-NZ trio MY BABY have announced a New Zealand tour to celebrate the release of their new live album out now.

With a formidable reputation as a live act, MY BABY’s roots-driven hypnotic dance music has taken the world by storm. The MY BABY Live! New Zealand Summer Tour kicks off in Raglan at the YOT Club on February 6.

See all dates and venues below. Tickets go on sale at 12.00pm on Monday December 2.

MY BABY’s sound is informed by gospel and blues with ancient folk melodies. Added to that is the rawness of 70s funk, African desert blues, Moroccan gnawa, Indian raga and a touch of EDM. It’s all live instrumentation without a computer or sample in sight!

The band, made up of New Zealander Daniel ‘Da Freez’ Johnson (guitar); Joost Sheik van Dijck (drums / vocals) and Cato van Dijck (lead singer and guitar), has been spreading their psychedelic blues-trance rave to the approval of audiences worldwide since 2012. They’ve played at some of the world’s biggest festivals, including Glastonbury, Isle of Wight, Sziget, Fusion and Exit.

Over the years MY BABY has had tons of requests to capture the magic of their live show, which they’ve now delivered in the form of the album LIVE! Listen here.

It’s always a challenge to put long live jams on a record, but the band has achieved the exact sound which they were aiming for. “On stage we always get such an amazing feedback from the audience, which feeds and gives great energy to the show, so this recording was especially tough” - says Cato.

This also means that our audience, who are used to listening to the album versions can discover - in some cases dramatic - changes. “We’ve reworked some of the songs into almost completely new ones,” says Joost.

MY BABY’s return marks the band’s fifth tour of New Zealand, where they have built up a dedicated and loyal fanbase. It was a reputation further reinforced when they performed at WOMAD 2018 to rave reviews.

“With their blend of dance-orientated roots, blues and funk with touches of world music they come across as a confident well-oiled machine that is obviously the product of constant touring” - RNZ