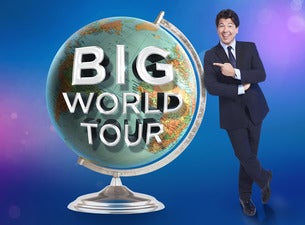 “The man is quite simply top-to-toe hilarious”

Britain’s biggest selling comedian Michael McIntyre has sold out in record time, selling out an arena show in THREE days with his BIG WORLD TOUR in March 2019. This eagerly awaited new show has proven that New Zealand fans can’t get enough of Michael McIntyre with a new show in Auckland announced.

Michael McIntyre’s Big World Tour will see the BAFTA award-winning comedian perform in arenas around the world.  The tour which started in late 2017 will come to NEW ZEALAND in June 2019.

Michael McIntyre’s spot-on observational comedy and trademark ability to turn everyday situations into master-classes of human exasperation have struck chords with millions of fans, resolutely cementing him as one of the UK’s most loved and treasured comedy performers today.

In the UK, Michael has sold over 1.5 million tickets, including a record-breaking 28 performances at London’s 16,000 capacity O2 Arena where he was awarded the keys to the venue in 2015, alongside musical talents Prince, Take That and One Direction.

Around the world, Michael has previously sold out arenas in New Zealand, Australia and Dubai and he holds the record for the biggest selling comedy shows in South Africa and Norway.

2016 saw the launch of Michael’s own television show Michael McIntyre’s Big Show.  In 2017, the show earned two nominations at the prestigious BAFTA TV Awards, including Best Entertainment Performance, which Michael went on to win - the show itself earned a nomination for Best Entertainment Program.  The last series averaged over 6.5 million viewers and the show returned for its third series in November 2017.

Michael has released four best-selling DVDs by Universal Pictures (UK) - Live and Laughing in 2008, Hello Wembley in 2009 (which became the fastest-selling UK stand-up DVD of all time), 2012's Showtime and 2015's Happy & Glorious, both of which became Christmas DVD best-sellers.  Collectively Michael has sold a staggering 3.5 million DVD's to date.

His debut autobiography Life & Laughing was released in 2010 by Penguin Books.  With hundreds of thousands of copies sold the book landed the coveted Christmas number one slot and became one of the best-selling non-fiction books that year.