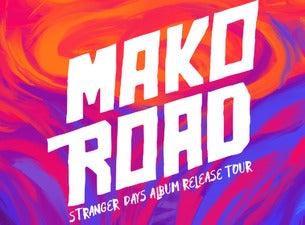 Indie-rock four-piece MAKO ROAD have just released their surefire biggest hit yet Don’t Keep Me Waiting and to celebrate the band have just announced a national New Zealand tour! Their highly anticipated debut album Stranger Days will be released on Friday 30th July and from there the band will hit the road taking in Auckland and Wellington.

With little airplay to date, Mako Road have built a substantial and loyal fanbase. They have received over 60 million streams and been certified Gold and Platinum multiple times across their earlier EP’s and single releases. Their heavy touring schedule has seen them translate their hazy summer psych grooves into an explosive live set, resulting in multiple sold-out Australasian tours, with their name appearing on festival bills including Splendour In The Grass, Electric Avenue, Sound Splash, Bay Dreams and Rhythm and Vines. They’ve also supported acts including Rudimental, L.A.B, Leisure, Shapeshifter and Ziggy Alberts.

Stranger Days will be released worldwide on July 30, followed by New Zealand tour dates as icing on the cake for fans.

Mako Road have fast become the most exciting independent act in New Zealand and the new album Stranger Days is the beginning of much, much more. The sky’s the limit for Mako Road band members Rhian Ward, Connor Jaine, Connor McErlich and Robbie Day.

These shows will sell out fast. Get your tickets the second they go on sale!