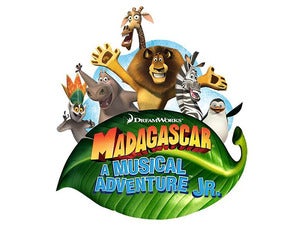 DreamWorks Madagascar – A Musical Adventure JR. features original music and lyrics by George Noriega and Joel Someillan and a book by Kevin Del Aguila.  As the show opens we learn that Marty the zebra may be celebrating his tenth birthday at the Central Park Zoo with his friends Alex the lion, Gloria the hippo, and Melman the giraffe, yet he longs to experience life outside of the zoo’s walls. When Marty eventually escapes, his animal friends from the zoo pursue him into New York City. After reuniting, the animals are chased by the police, and ultimately felled by tranquilizer darts. They awake, trapped in crates, on a ship, which – through a series of events – is thrown off course.  Upon reaching land the animals discover they have been shipwrecked on the island of Madagascar.  Ultimately, it is only in being so lost that they can begin to discover where they really belong.