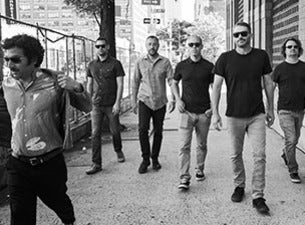 California ska punk band Mad Caddies came of age during the mid-'90s ska revival precipitated by bands like The Mighty Mighty Bosstones and Rancid. Blending the jaunty, upbeat-heavy rhythms of ska and the oi! sensibility of punk, the Caddies live shows are a frenetic affair characterized by mosh pits and plenty of skanking. With a new album in the works for 2014, the Caddies are once again on the road, treating rude boys and rude girls around the country to adrenalin-filled sets of old and new material.

Formed in Solvang, California, in the mid-'90s, the members of the Mad Caddies performed at their high school and at regional venues throughout Southern California before signing to Honest Don's Records for 1997 debut full-length Quality Soft Core. The band's tight playing on the album and catchy songs like "Distress" attracted the attention of NOFX's Fat Mike, who signed the Caddies to his Fat Wreck Chords imprint for their 1998 sophomore album Duck and Cover. Over the course of five studio albums and several international tours, the band has amassed a loyal fanbase that will be out in full force at their 2014 tour dates.

"When the Mad Caddies went on the crowd was at a fever pitch. They played a good mix of old and new and rocked the house for a good hour and a half. LONG LIVE THE MAD CADDIES!"