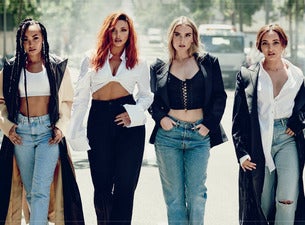 The world’s biggest girl band, Little Mix today announced the addition of an Auckland show to their five date Australian 'LM5 - The Tour' this December.

Kicking off in Perth on December 7 the UK pop superstars will head across to New Zealand to perform one show only at Auckland’s Spark Arena on Thursday, December 19, their first New Zealand tour since July 2017.

Little Mix released their brand new single 'Bounce Back' on June 14. The song was produced by the legendary Stargate (Rihanna, Beyonce, Katy Perry), and features an ingenious sample from the classic Soul II Soul smash 'Back To Life'.

“New Zealand is one of our favourite places to visit, and we always love seeing all your beautiful faces when we’re on tour. Our fans really are the best, we adore them so much, and we can’t wait to come back in December and treat them to some very special moments from LM5 in our amazing new live shows!” - Little Mix.

The show will see Little Mix perform songs from their latest album 'LM5' such as the global smash 'Woman Like Me', alongside their greatest hits including 'Touch', ‘Shout Out to My Ex', ‘Black Magic’ and 'Wings'.

New Zealand pop act Robinson will be special guest support on all dates. “Karma” is Robinson’s latest release, following an array of successes for the pop newcomer. In 2018 her debut single “Nothing to Regret” was certified Platinum in New Zealand and Australia, she received two nominations at the New Zealand Vodaphone Music Awards for Breakthrough Artist of the Year and Single of the Year, and she finished a successful UK and European tour supporting Hayley Kiyoko and Australian tour supporting Dean Lewis.

Little Mix have firmly established their reputation as one of the most phenomenal performers around. Alongside massive tours of Europe, Australia, Japan and the US, the group’s shows have also been named as the biggest UK arena tours for 2016 and 2017. In 2018 they toured stadiums across the UK with the 'Summer Hits' Tour.

Little Mix’s fifth album, 'LM5', written and produced by the band with such luminaries as Ed Sheeran, Jess Glynne, Camille Purcell, MNEK, Timberland, Loose Change, TMS and RAYE.  The collection is their strongest work to date, being as the girls themselves say “the album we always wanted to make”.  'Woman Like Me' featuring Nicki Minaj, the first single from 'LM5', stormed the charts to become Little Mix's 13th UK Top 10  hit.

Since 2011, Perrie Edwards, Jesy Nelson, Leigh-Anne Pinnock and Jade Thirlwall have not only established themselves as one of British pop’s brightest acts, but as a global pop phenomenon. They have fully cemented their status as the world’s biggest girl band, with the quartet asserting dominance in the charts album after album.

Little Mix have sold more than 50 million records worldwide and notched up a total of four UK No.1 singles, four platinum-selling albums and nine platinum selling singles, surpassing a record previously held by the Spice Girls. Their album 'Glory Days' is the biggest selling album by a female group this millennium in the UK, alongside being named the longest-reigning Top 40 album for a girl group ever.