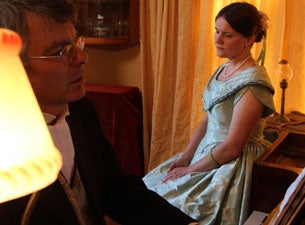 Lines from the Nile Tickets

About Lines from the Nile

LINES FROM THE NILE

A great dollop of British patriotism will be served with delightful music and a high tea at the Nice Hotel.

Written by Jacqueline Coats, Lines from the Nile is a humorous collaboration between soprano Rowena Simpson and pianist Douglas Mews. Presented through the eyes of two early New Zealand settlers, audiences are invited to a “humble soiree” to honour the wedding of Queen Victoria and Prince Albert and the triumphant efforts of the British Navy.

Simpson and Mews not only perform this fresh work, they also deliver five other pieces written by Joseph Hadyn for his English friends.

This afternoon event is British patriotism in all its Victorian glory.

Described as “an hour’s worth of stunningly-wrought, cheek-by-jowl evocation by just two performers”, Lines from the Nile won Best Music Production at the 2014 New Zealand Fringe Festival.