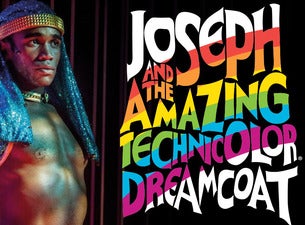 About Joseph and the Amazing Technicolor Dreamcoat

JOSEPH AND THE AMAZING TECHNICOLOR DREAMCOAT

One of the most enduring shows of all time Joseph and the Amazing Technicolor Dreamcoat is now reinvented for a new generation. With a contemporary twist, the show exudes all the colour, wit and energy of this irresistible family musical.

A joyous retelling of the Biblical story of Joseph, his eleven scheming brothers and his coat of many colours, Joseph is a kaleidoscope of catchy songs and colourful dance numbers - Any Dream Will Do, Close Every Door to Me and Go Go Go Joseph – parodying various musical styles from rock ‘n’ roll to country and western, French ballad, calypso and jazz.

This lavish international production features an outstanding cast, including Jonathan Roxmouth, who starred in Grease in New Zealand and The Phantom of the Opera internationally. The UK’s longest-running musical, which has enjoyed three West End productions, one on Broadway, and continues to tour the US and UK, Joseph launched the careers of both Andrew Lloyd Webber and Tim Rice, who went on to become one of the most successful musical theatre partnerships of all time.