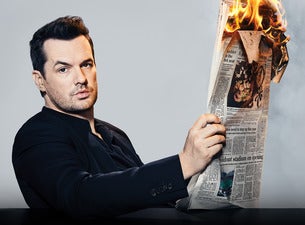 Due to the scheduled filming of his own brandnew major US TV pilot, Jim Jefferies’ 2016 New Zealand tour dates have been rescheduled to January 2017.

Ticketholders who are able to attend the new dates need take no action; their existing ticket will be valid for entry at the rescheduled show and their location within the venue will remain unchanged.

Frontier Comedy sincerely apologises to all those affected by this postponement. Existing ticket holders unable to attend the new shows are asked to secure a refund from their original point of purchase by Wednesday 19 October.

Tickets for rescheduled tour dates are on sale now.

He’s amassed more than 200 million online views, sold out massive worldclass venues like Carnegie Hall and Brixton Academy and sold more than 50,000 tickets on his last Australian tour. Add to all this his sixth monster standup special in the USA Freedumb which recently premiered on Netflix a critically acclaimed sitcom (Legit) and now confirmation of his new TV pilot and it’s clear, Jim is one of the world’s biggest standup comedy heavyweights. He's the hottest ticket here and around the globe. See Jim live on his full New Zealand national tour in January 2017!