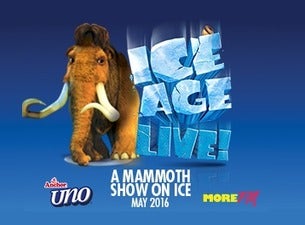 This May, Ice Age Live! A Mammoth Show On Ice is coming to New Zealand for the first time. Due to popular demand, a second Sunday show at 2pm has just been released, with tickets starting at $39 (plus booking fees) on sale now. In addition to the new Sunday shows, special group prices have also been released.

From the creators of Cirque du Soleil, Ice Age Live! A Mammoth Show On Ice is hailed as one of the best family shows of this decade. Audiences will be treated to a spectacular event, including huge LED screens, pyrotechnics and acrobatics performed by world-class athletes. A spectacular ice skating show, Ice Age Live! A Mammoth Show On Ice sees the loved characters from the three blockbuster Ice Age movies. Follow Manny, Sid and Diego as they set out to rescue young mammoth Peaches when she is kidnapped by an evil bird. Helped by Scrat, the acorn-loving squirrel, they have all kinds of adventures, surviving an avalanche and discovering an enchanted garden. All of this in a colourful and enchanting arena ice spectacular set to entertain the entire family.

Ice Age Live! A Mammoth Show On Ice has delighted audiences of all ages in its global, five-year tour, visiting more than 30 countries around the world. It is an impressive show on a mammoth scale, be prepared to enjoy it as much as the kids do.

Ice Age Live! A Mammoth Show On Ice is produced by Stage Entertainment Touring Productions. The show is co-directed by the brilliant mind behind Cirque du Soleil productions, Ka and Dralion, Guy Caron. Dialogues are supervised by Michael Berg, who co-wrote the Ice Age films.