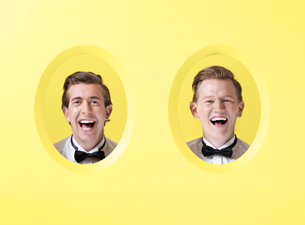 And we’re live! The oven’s caught fire, David is drinking and Peter has bad news. In this immersive new work co-created by theatrical daredevil Kip Chapman, we meet two of New Zealand’s trailblazing TV personalities at a pivotal point in their relationship and up to their eyeballs in cold cheese soup and melting cream castles.

Before Masterchef and My Kitchen Rules there was Hudson & Halls. In the closet with the door wide open, Peter Hudson and David Halls were New Zealand’s original great gay love story.

In this new commission from Silo, prepare to be transported to a 1980s television studio for big laughs, rum-fuelled showdowns and very questionable cooking.

Suitable for ages 10 and up. Contains some coarse language.