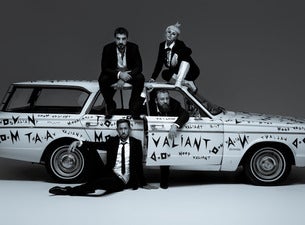 Bring on the goosebumps. Melbourne’s own and worldwide-beloved, HIATUS KAIYOTE, are returning to New Zealand touring their latest album Mood Valiant.

My Live Nation members can be the first to get tickets through the presale beginning 11am Monday May 10 until 11am Tuesday May 11.

Hiatus Kaiyote broke internationally in 2012 with their first LP, Tawk Tomahawk, praised by music legends from Erykah Badu to Questlove to Prince. Comprised of Naomi “Nai Palm” Saalfield (guitar, vocals), Paul Bender (bass), Simon Mavin (keys), and Perrin Moss (drums), the four began recording their first album from home in Melbourne, quickly picking up a following on the local scene. From there, the band’s success has been undeniable. Garnering their first R&B Grammy nomination for single “Nakamarra”, followed by a second nomination for “Breathing Underwater” featured on their album Choose Your Weapon. With up to 1 million monthly listeners and nearly 30 million streams worldwide on Nakamarra alone, Hiatus Kaiyote have subsequently built their empire.

Their records and live shows won them praise in The Guardian, Rolling Stone, and The New York Times, where Jon Pareles wrote that, “Hiatus Kaiyote’s music stretches and bends every parameter.” But after four years of recording and touring – from Glastonbury in England to Fuji Rock in Japan, from rocking the Roots Picnic to selling out the Sydney Opera House – the band decided to take a break.

By October 2018, recording for Mood Valiant was already well underway. The band, ready to demonstrate their well awaited, highly skilled grasp of jazz, funk and R&B once again this time alongside legendary Brazilian arranger Arthur Verocai. Mood Valiant has travelled a journey unlike most with frontwoman Nai overcoming a breast cancer diagnosis and coinciding with the Covid pandemic. Creating an incredible sense of integrity. Mood Valiant, an album as an act of love and courage. Soon to be shared with the masses.

Hiatus Kaiyote continue to path new direction in music today. Their return to New Zealand will be just as groundbreaking as their last.