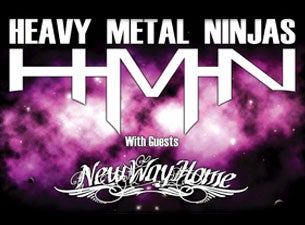 Led by guitar virtuoso (Ibanez and DiMarzio endorsed) Richie Allan, the band are, as you would expect, all about the metal and 'ripping people's faces off and blowing their ears apart'.

Delivering a jaw-dropping performance of the winning classical composition at last year's APRA awards, the sheer power and spectacle of their live show has to be witnessed first-hand.

Heavy Metal Ninjas have been called 'seriously cosmic... vividly cinematic', and in the two short years since their formation the band have already gained a reputation as consummate showmen.

Their epic instrumentals are accompanied by a jaw-dropping light show that has them firing laser beams from their fingers and yes, since you asked - all while dressed as ninjas.

Their brand new self-titled EP debuted at number five in the NZ charts and has been highly praised for its '...brutal and beautiful precision'. They won't be our best kept secret for long - catch them while you can this August!