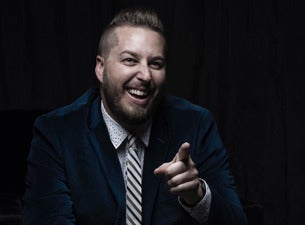 For comedian Heath Harmison, being a family man means you get to learn something every day. It could be about the kind of miracles that only happen at Walmart, or what to do when you discover your kid may really be Gollum, or why every woman should want the "Dad Bod."

While some fathers may not be brave enough to share all that hard-earned wisdom, Harmison is eager to let audiences know and get them laughing about it. A proudly PG-13 comic, Harmison may like to keep it clean, but that doesn't make him corny. With his high energy and sharp observational skills, he combines wide appeal with unpredictability.

Harmison first caught the stand-up bug while studying nursing in his hometown of Twin Falls, Idaho. His versatility set him apart from other young comics, what with his eagerness to mix up his family-centric humor with displays of physical comedy and improv (his spoofs of Christopher Walken, Vince Vaughn, and Snoop Dogg are a testament to his abilities as an impressionist).

He's shared stages with such comedy icons as Brad Garrett, Louie Anderson, Dennis Miller, and Eddie Griffin. He also gained exposure at Edinburgh's legendary Fringe Festival, on the first season of the Fox series ‘Laughs,' and on the Dry Bar Comedy network. In 2015, Harmison released his debut concert special, ‘Raising Insanity,' a showcase of the comic's hilarious and relatable take on Little League, potty training, and more than a few grown-up topics.

Since moving from Boise to Las Vegas, Harmison has become one of the busiest comedians on the Strip, performing regularly at Planet Hollywood, the Tropicana, and the MGM Grand. In the meantime, you can bet that the many inanities and insanities of family life continue to provide him with ample fresh material.