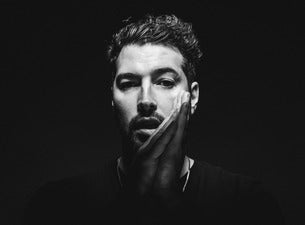 Riding high off the massive success of new single ‘Foolproof’, Hayden will bring his full array of George FM hits to Auckland for a show that gives fans the chance to experience his performance up close in one of Auckland’s best sounding venues.

Vodafone customers can access tickets first in the Vodafone Rewards presale from Tuesday July 6, 10am until Thursday July 8, 10am. Visit vodafone.co.nz/music for more info.

My Live Nation members can also access presale tickets, from 11am Thursday July 8 until 10am Friday July 9.

Multi-award-winning producer Hayden James became the sound of summer when ‘Something About You’ was released in the heat of December 2014. Fast forward to today and a global audience is hooked on his sound, with a collection of tracks that has amassed over half a billion streams. Hayden’s most recent single ‘Foolproof’, a collaboration with Gorgon City, has been a massive hit on NZ radio and one of George FM’s most spun tunes since its March release.

This year is slated to be another stand out with more upcoming collaborations and remixes for some of the biggest artists in the world today. Don’t miss the chance to see Hayden James up close at this special show!