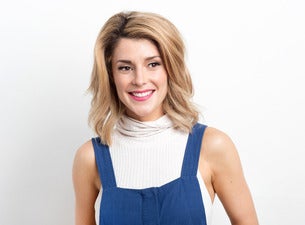 YouTube sensation and all-around funnygirl Grace Helbig epitomizes a new way to make it in the entertainment biz – use the internet to put yourself out there and get seen. Through her immensely popular vlog DailyGrace, Helbig singlehandedly amassed a huge web following that has translated into real-world gigs in comedy clubs and concert halls around the country. Beloved for her incisive commentary on social media, her wicked talent for witty puns, and the easy rapport she shares with fellow comedienne and frequent collaborator Mamrie Hart, Helbig returns to the stage in 2014 with her hilarious new show This Might Get Weird, Y'all.

Born in New Jersey, Grace Helbig honed her comedy skills during college, attending improv classes and forming the sketch comedy group "Baked Goods." With her fantastically popular video blog DailyGrace, she produced and uploaded a video to the internet nearly every day between the years 2008-2013, racking up over 200 million views and more than two million followers. The show's success garnered her much attention and several creative partnerships, including a hosting gig on web show My Damn Channel LIVE. After wrapping up DailyGrace in late 2013, Helbig turned her attention to her it'sGrace YouTube channel, building more than one million subscribers by early 2014.