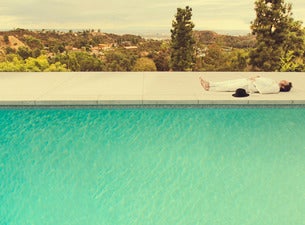 "This is a highly accomplished and deeply felt third album to add to an already auspicious Gaz Coombes canon...undoubtedly one of Britpop’s Strongest Men." — musicOHM.com

World’s Strongest Man is the follow up to 2015’s Matador – a record pretty much conceived, recorded and mixed in the studio equivalent of solitary confinement. Following its release, Gaz evolved from ‘the former Supergrass frontman’ to hugely respected Mercury nominated solo artist in the space of just ten months. That album spawned five singles and was described by Q as “his masterpiece”.  Like Matador, World’s Strongest Man was written, recorded and produced by Gaz Coombes at his home studio and at Oxford’s Courtyard Studios (with co-production from long time studio partner Ian Davenport in a working process Gaz compares to what it must be like “editing a novel”).

This follow-up goes the whole hog. ... Frank Ocean's Blonde reportedly influenced the tech-driven songwriting process, but there are echoes, too, of U2 at their more exploratory, and, on the twisty-riffed In Waves, last year's QOTSA album. — Q Magazine 8/10