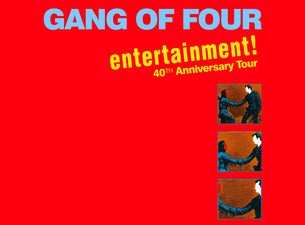 Post-punk funk politicos GANG OF FOUR play Entertainment’ in full + a stack of other hits!

‘one of the most influential bands in punk history’ (Mancunion)

‘They sound enormous. They have a whiff of danger and revolution about them' (Louder Than War)

Celebrating the 40th Anniversary of their debut release, Entertainment! (Damaged Goods, Anthrax, Naturals Not In It, At Home He’s a Tourist) they will play the album in full + other Hits (I Love a Man in Uniform, What We All Want, Paralysed, To Hell With Poverty) and more