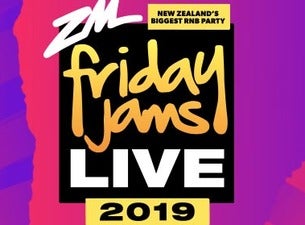 RETURNS THIS NOVEMBER WITH BIGGEST LINEUP TO DATE!

New Zealand’s biggest party – Friday Jams Live – returns in 2019! For the third year in a row Illusive Presents, Frontier Touring and ZM are bringing the nation’s colossal concert series back to Auckland for one show only this November!

This season will raise the bar yet again by bringing some of the world’s most legendary icons of RNB together at the same venue as the record-breaking 2018 edition. Auckland’s Western Springs Stadium will be transformed into the hottest party of the year – treating fans to superstar performances and non-stop hits across seven glorious hours.

GET READY NEW ZEALAND as Friday Jams Live delivers the most jaw dropping line up to date.

With all artists performing exclusively at Friday Jams Live DO NOT miss your only chance to witness RNB and Hip-Hop royalty perform all their hits live on one stage.

JANET JACKSON - RNB royalty and five-time GRAMMY Award winner Janet Jackson takes full ‘Control’ of Friday Jams Live 2019 with her countless multi-platinum hits paired with the tightest of choreography. The youngest of the Jackson’s, Janet burst onto the RNB scene in the 80s, heralding a fresh concept for RNB music.  Her fierce independence quickly struck a chord with fans, empowering millions with her honest, sensual lyricism, wrapped in hypnotic synth-heavy beats.

Fresh from her Las Vegas residency, Jackson and New Zealand fans will come ‘Together Again’ and it’s the reunion you don’t want to miss. Celebrating the 30th anniversary of her album Rhythm Nation, Jackson will deliver all-encompassing jams from ‘Nasty’ and ‘That’s The Way Love Goes’ (#1 NZ Platinum) through to ‘All For You’ (#5 NZ Gold) and ‘Scream (featuring Michael Jackson)’ (#1 NZ Gold). Jackson will give every ‘R&B Junkie’ their fix at Friday Jams Live 2019 – see you on the dancefloor!

BLACK EYED PEAS - With five NZ Top 20 albums (5x certified NZ Platinum), eleven NZ Top 10 singles (four #1!) and seven GRAMMY Awards under their belt, the Black Eyed Peas will be lighting up the Friday Jams Live stage – New Zealand, get ready to ‘Pump It’! Featuring will.i.am, apl.de.ap and Taboo, The Energy Never Dies with the Black Eyed Peas  revolutionising Western Springs Stadium into  the biggest party audiences have ever seen.With countless anthems like ‘Where Is The Love?’, ‘Shut Up’, ‘Don’t Phunk With My Heart’, ‘Boom Boom Pow’, ‘The Time (Dirty Bit)’ and ‘Meet Me Halfway’. New Zealand ‘I Gotta Feeling’ it’s going to be a good night!

50 CENT - One of the most indelible and influential figures of hip hop from our time, 50 Cent will bring ‘Disco Inferno’ to crowds at Friday Jams Live 2019. Turning the dancefloor into the hottest club in town, 50 Cent will be delivering bump and grind goodness with hits ‘Candy Shop (Feat. Olivia)’, ‘Just A Lil Bit’, ‘P.I.M.P (Feat. Snoop Dogg)’, ‘Ayo Technology (Feat. Justin Timberlake)’ and ‘21 Questions (Feat. Nate Dogg)’. Don’t miss out on a night ‘In Da Club’ with RNBs main man, 50 Cent!

JASON DERULO - ‘Whatcha Say’? You heard it here first, the name which demands to be sung – Jason Derulo – will be heading to Friday Jams Live 2019. Hot on our radars since 2010’s NZ #5 eponymous album, Jason Derulo will bring his polished moves and contagious energy to the stage this November. Turning up the heat with tunes like ‘In My Head’ (NZ Platinum), ‘Don’t Want To Go Home’, ‘Want To Want Me’ (Platinum) and ‘Ridin Solo’ - NZ, get ready to ‘Wiggle’!

KERI HILSON - Want more? Keri Hilson’s ‘Got Your Back’. The multi-award-winning singer-songwriter will bring her slick ‘Energy’ to the Friday Jams Live stage. Hilson will keep audiences on their feet with slamming hits ‘Knock You Down’ (NZ Platinum), ‘Buyou’ and the colossal Timbaland anthem ‘The Way I Are’ - Hilson will have the crowd chanting songs at the top of their lungs.

SISQO - The Dragon will be unleashed at Western Springs Stadium! Sisqo returns to New Zealand with a vital catalogue of hot tunes like ‘Unleash The Dragon’, ‘Incomplete’, and forever favourite ‘Thong Song’!

SAVAGE –  With five NZ Top 10 singles (5x Platinum) under his belt New Zealand’s very own king of the party jams is sure to get those hips into the ‘Swing’ of things at Friday Jams Live 2019. Freaks are sure to be dancing under the ‘Moonshine (feat. Akon)’ at Western Springs Stadium this November!

J-KWON - Guaranteed to bring audiences to their feet is notorious party starter J-Kwon who made waves with the 2004 essential RNB jam, ‘Tipsy’. Make sure you’ve got your crew together when it’s pumping!

On top of this epic line-up, one final act remains to be revealed – stay tuned to find out which MYSTERY ACT will be joining the class of Friday Jams Live 2019!

HORIZON & YO! MAFIA - No Friday Jams Live event would be complete without Australia’s #1 RNB DJ, Horizon and the international party DJ YO! MAFIA keeping tradition spinning the latest and greatest RNB and hip hop tracks from the generation between these epic live performances, from the minute gates open until the last mic drops.

Friday Jams Live is the biggest party of the year, don’t miss your one and only chance to catch these superstars live on stage. With tickets quickly vanishing in previous years, fans are advised NOT to be fashionably late to this party.

The countdown starts now, get in quick!