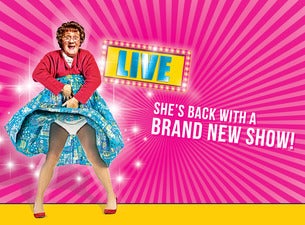 For the Love of Mrs. Brown Tickets

About For the Love of Mrs. Brown

MRS. BROWN RETURNS TO NZ WITH HER BRAND NEW SHOW!

‘FOR THE LOVE OF MRS. BROWN’

Presale tickets available from Ticketmaster (Auckland) at 9am Tuesday August 1st with general tickets on sale Thursday 3rd August (at 9am).

FOR THE LOVE OF MRS. BROWN is the latest production of the side-splitting series written by and starring Brendan O’Carroll. This brand new hilarious show sees Agnes looking for love using D’Internet, Cathy thinks plastic surgery might be the answer to getting that ring on her finger, Dermot realises he may need to step it up with the romance to keep his marriage fresh and even granddad has found love!

Since the Browns left New Zealand in 2016 they have kept busy with a very special Live Broadcast in July 2016 celebrating 60 years of Comedy with the BBC, Christmas Specials, a UK and Ireland Sell Out Arena Tour and Agnes’ brand new TV Chat show, All Round to Mrs. Brown’s, which attracted huge ratings earlier this year in the UK and Ireland when it aired to a staggering 5 million viewers each Saturday night.

All Round to Mrs. Brown’s is currently showing on TVNZ each Thursday Night. For all Mrs Browns’ die hard fans, you are in for the biggest treat. For those who haven’t experienced Mrs Brown’s Boys live, For the Love of Mrs. Brown it is not to be missed.

"Come and see live what they can't show on D'TV”