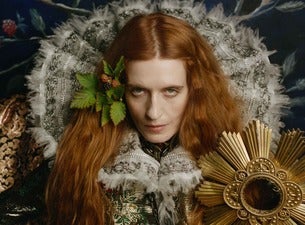 About Florence + The Machine

Frontier Touring, Chugg Entertainment and Laneway Presents are delighted to announce the return of Florence + The Machine to Australia and New Zealand playing  arena shows next March as part of their global Dance Fever Tour.

Frontier Members pre-sale starts 11am local time Wednesday 4 May before the General Public on sale at 11am local time Friday 6 May via: frontiertouring.com/florenceandthemachine

Touring in support of Florence + The Machine’s fifth studio album Dance Fever – to be released Friday 13 May via Universal Music, pre-order here – the album is produced by Florence Welch, Jack Antonoff and Dave Bayley, featuring singles ‘My Love’, ‘King’, ‘Heaven Is Here’ and ‘Free’ plus accompanying videos, all by acclaimed director Autumn de Wilde.

Dance Fever was recorded predominately in London over the course of the pandemic in anticipation of the world’s reopening. It conjures up what Florence missed most in the midst of lockdown – clubs, dancing at festivals, being in the whirl of movement and togetherness – and the hope of reunions to come. It’s the album that brings back the very best of Florence –  wielding anthems like a flaming sword – poking sly fun at her own self-created persona, playing with ideas of identity, masculinity and femininity, while being redemptive and celebratory, stepping fully into her place in the iconic pantheon.

Dance Fever comes in the wake of a sea of critically acclaimed and widely doted musical scores that are adored by a myriad of fans that disperse through near every generation and demographic. The band's debut album Lungs (2009) peaked at #3 on the ARIA Albums Chart and is certified 4x Platinum, while their sophomore release Ceremonials (2011) captivated audiences, taking the #1 spot on the ARIA Albums Chart, also gaining 4x Platinum certification. The prior success of their debut records ensured that the magic would continue even after a four-year break from releasing music, with How Big, How Blue, How Beautiful (2015) also dominating the #1 spot in the ARIA Charts and High As Hope (2018) securing the #2 spot.

Florence + The Machine last toured Australia and New Zealand in 2019 to much acclaim, wowing audiences with breathtaking vocals, spellbinding choreography and moments of aural captivation that can only be experienced live. Australia was one of the first countries outside the UK to adopt Florence + The Machine as their own, landing a spot in the line-up at Laneway Festival in 2010. With a huge fan base down under, the band has sold over one million albums in Australia (17 million globally), boasting 412 million Australian streams (10.2 billion globally). Early favourites ‘You’ve Got The Love’, ‘Dog Days Are Over’ and ‘Never Let Me Go’ all certified 6x ARIA Platinum.

‘There’s a certain sense of pomp and grandeur to the Florence + The Machine live experience that you expect – string sections, wild dancing, beautiful costumes – her music lends itself to such presentation.’ – Double J

‘She was a sight to behold, and seemingly effortlessly continued to hold the audience in the palm of her proverbial hand for the remainder of the night.’ – Ambient Light

Supporting Florence + The Machine is American singer, songwriter, and multi-instrumentalist King Princess (aka Mikaela Straus), who will open at each of the Australian and New Zealand shows. Her debut EP Make My Bed was released in 2018 and debuted at #1 in the Official New Zealand Music Chart. The debut single off the EP titled ‘1950’ peaked at #25 in the ARIA Charts and is certified 2x ARIA Platinum, while the second release ‘Talia’ is certified ARIA Gold. In 2019 King Princess released her debut studio album Cheap Queen featuring title track ‘Cheap Queen’ and ‘Prophet’, which both peaked at #17 on the Official New Zealand Music Chart. Having already released new standout tracks ‘Little Brother’ and ‘For My Friends’, her newest album is due later this year.

Don’t miss Florence + The Machine with special guest King Princess when they return to Australian and New Zealand shores in 2023 with their most ceremonious live shows yet.