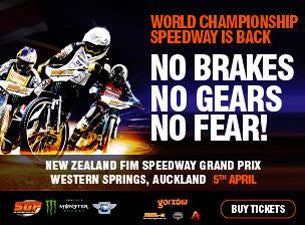 WORLD CHAMPIONSHIP MOTORSPORT - A GREAT NIGHT OUT FOR THE WHOLE FAMILY

World Championship speedway is back at Western Springs as the famous Auckland motorsport venue welcomes the top 15 solo riders in the world on Saturday 5 April to contest the 2014 New Zealand FIM Speedway Grand Prix.

Guaranteed thrills and spills, with speedways elite competing for vital championship points in the opening round of the FIM Speedway Grand Prix series. It is adrenalin fuelled action at its best with the bikes reaching speeds of up to 70mph on 500cc bikes with no brakes, an exciting 23-heat format  23 starts and 23 finishes  and you dont know the winner until the final second!

Wheel-to-wheel action, entertainment and a party atmosphere  its a great night out for the whole family.