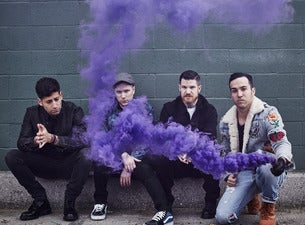 About Fall Out Boy

Fall Out Boy in Concert

After a five-year hiatus, emo torchbearers Fall Out Boy surprised fans in 2013 with not one but TWO highly contrasting new releases, reestablishing themselves as one of the biggest pop punk bands in the business. First came Save Rock and Roll, a true return to form for the band, chock-full of explosively melodic songs like “My Songs Know What You Did In The Dark.” Several months later the foursome followed up with the Ryan Adams-produced PAX AM Days EP, which contrasted the glossy production of Save Rock and Roll with a raw sound that exposed the hardcore punk influences the band had previously only hinted at. Taken in combination, the two releases highlight a band with considerable range, simultaneously comfortable penning pop hits and punk anthems. Fall Out Boy impressed critics and fans alike with their intense live performances on 2013’s Save Rock and Roll Tour – ticket buyers have described it as a rock and roll experience they won’t soon forget.

Fall Out Boy on Tour

Green Day, Fall Out Boy and Weezer, three of the biggest acts in rock music, are hitting the road together for the first time ever on THE HELLA MEGA TOUR presented by Harley-Davidson.

The global tour kicks off June 13, 2020 in Paris and will visit cities across Europe and the UK throughout the month including Glasgow, London, and Dublin. Produced by Live Nation, the 20-city North American outing will bring the bands to some of the most renowned stadiums including Dodger Stadium, Wrigley Field, Citi Field, Fenway Park, and more. Beginning July 17 in Seattle, WA, the outing makes stops in Houston, Miami, Toronto, New York and more, before wrapping August 29 in Philadelphia, PA. More dates will be announced. The Interrupters will appear as special guest on the tour.