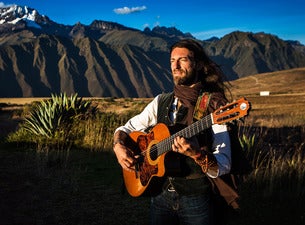 Dazzling guitar wizard Estas Tonne transforms passionate improvisations into high art. Since kicking off his busking career in New York in 2001, the classically trained, Ukrainian-born musician has been a nomadic missionary for music as a life-changing spiritual force. More than 50 million people have viewed his 2012 viral video "The Song of the Golden Dragon," which depicts him pouring heart and soul into his music while surrounded by an enraptured crowd of German passersby.

Born Stanislav Tonne in 1975, Estas studied classical guitar as a child before moving from the Soviet Union to Israel with his parents. After not playing guitar for several years, he eventually found his way to Southern California, where loneliness and hopelessness gave way to an epiphany about his artistic calling.

Classical music turned out to be just one of many elements of this instrumental pathfinder's style. Spanish flamenco, Roma folk music, and Cuban rhythms also contribute to a powerful, uniquely eclectic, and relentlessly rhythmic personal style. Tonne hits one emotional peak after another as smoke drifts from the ubiquitous stick of incense tucked into his nylon guitar strings.

Never resting anywhere for more than a year, Tonne has lived and worked in India, Mexico, South America, Russia, and across Europe since embarking on his journey. He celebrates his itinerant lifestyle in tracks like "The Way of the Gypsy" and "All Gypsies Swing." Although Tonne flourishes as a soloist, guests such as former Santana drummer Michael Shrieve sometimes join him onstage.

Beginning with ‘Black and White World' in 2002, Tonne has released more than a dozen albums. His recent recordings and performances often consist of extended improvisations, spontaneous musical journeys punctuated only by the guitarist's impromptu philosophical musings. The "synchronistically improvised" 2018 double album ‘Live in Ulm' captured the magic of his 2017 Reviving Water tour. In November 2018, Tonne returned to the United States for the Breath of Sound tour, his first extensive U.S. outing.