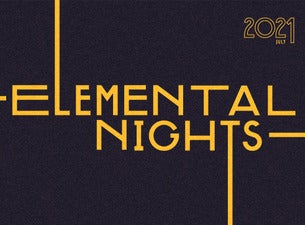 Following the success of 2020’s inaugural festival, Live Nation in association with Auckland Unlimited, is proud to present Elemental Nights 2021 as part of Elemental AKL festival.

Thanks to the Trans-Tasman ‘bubble’ gateway, Elemental Nights is ecstatic to deliver an elite concert series showcasing an impressive line-up of local and international artists, including a dedicated evening in celebration of the 40th Anniversary of eponymous record label Flying Nun.

This winter, Elemental Nights will awaken some of Auckland's most iconic venues with the sounds of Julia Jacklin (AU), Courtney Barnett (AU),  and The Chats (AU). More acts are due to be announced.

Melbourne-based, indie pop/folk, singer songwriter, Julia Jacklin will give a rare solo performance drawing on songs from her extensive catalogue as well as her critically acclaimed, 2019 album ‘Crushing’.

The Flying Nun 40 Years Anniversary Concert will literally consume the Auckland Town Hall for one night only –  delivered across three stages with standout performances by many of the label’s most celebrated artists including; Aldous Harding (solo), Straitjacket Fits, Reb Fountain, The Subliminals, Superette, The Bats, Mermaidens, Wax Chattels and Voom + more to be announced.

Punk rock band The Chats dial things up a notch returning to New Zealand with their signature sound they dub ‘shed rock’. Their single ‘Smoko’ has had in excess of 12 million views on Youtube and attracted the attention of rock royalty Dave Grohl, Josh Homme and Iggy Pop, the latter two artists booking the Queensland 3 piece to open for them on their Australian tours.

Designed, produced and promoted by Live Nation, whether you care to croon in unison, rock your heart out or dance vigorously, these one-off special shows should not be missed.

Live Nation New Zealand Managing Director Mark Kneebone said, “After the success of last year’s inaugural Elemental Nights, we are pleased to be able to create another spectacular lineup this year featuring international artists and a special ode to New Zealand music industry royalty, Flying Nun. We are proud to partner with Auckland Unlimited on this venture as we all work to create rich live experiences for audiences and showcase our unique Auckland venues.”

Auckland Unlimited’s Head of Major and Business Events Richard Clarke says it is fantastic to partner with Live Nation to deliver the Elemental Nights concert series as part of Elemental AKL.

“Elemental AKL is about drawing together a range of exciting events that encourage people to visit and get out and about in Auckland during the quieter winter months, and Live Nation has certainly delivered on that with this year’s line-up.”

events, celebrating the culture, cuisine and creativity of Auckland.  From 14 July to 1 August, Elemental AKL events will transform eateries and bars, theatres and public spaces across Auckland into hubs of exciting experiences.

From high-end ticketed experiences to free events, the line-up features enlightening, surprising, thought-provoking, nourishing and unique experiences to feast your eyes, feed your mind and fill your heart. Elemental AKL is delivered by Auckland Unlimited, Auckland’s economic and cultural agency.