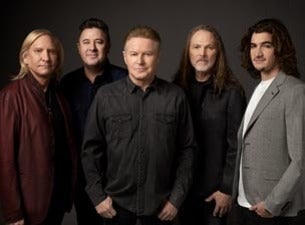 Frontier Touring are delighted to confirm that seminal American rock band Eagles will bring their critically-acclaimed Eagles World Tour to New Zealand in February and March.

The best-selling American band of the 70s and one of the top-selling acts of all time, Eagles’ appeal continues to transcend both generation and genre. Since forming in Los Angeles in 1971, the band have sold more than 150 million albums, scored six #1 albums and topped the singles charts five times.

On this tour, the Eagles - Don Henley, Joe Walsh and Timothy B. Schmit, with Vince Gill and Deacon Frey - will be accompanied on stage by an incredible live band that includes a full horn section and full string section. Since the tour began in March, the rock icons have performed to more than half a million fans, gathering shining reviews from critics and fans alike:

‘With Gill and Deacon Frey on board, and the band’s veteran members clearly reinvigorated, the Eagles are back in orbit. Long may they fly.’ - The San Diego Union Tribune

‘It took all of about 20 seconds [...] to realize this newfangled Eagles lineup would deliver the goods sonically in concert...The melange of voices melded into the familiar smooth harmonies that helped the Eagles distinguish themselves from so many other groups over their career.’ - Herald Extra

‘It’s amazing that the musicians can make it seem so effortless when you can see with your own eyes how demanding it is. Gill’s crack guitar work is another tool in the arsenal, superbly complementing Steuart Smith’s fretwork.’ - Best Classic Hits

The Antipodean leg of this tour marks their first visit to our countries in four years, last visiting in 2015 for a 14-date run on their famed History of the Eagles World Tour. Demand for tickets was so high that multiple arena shows were added in each capital city, alongside two very special outdoor shows at Hanging Rock and Hope Estate.

Undeniably one of the most pivotal bands in modern music, Eagles have won six GRAMMY® Awards, were inducted into the Rock & Roll Hall of Fame in 1998, in their first year of eligibility, and received the Kennedy Center Honors in 2016.

To further celebrate their prolific career, Eagles will release their Legacy collection in two comprehensive editions on Friday 2 November (via Warner Music Australia) — available in both a 12-CD/DVD/Blu-ray set, and a 15-LP set.

Don’t miss the opportunity to witness Eagles’ unmistakable West Coast harmonies and unparalleled songwriting talent come alive as they return to New Zealand in 2019. Their shows on our shores have a reputation for selling out, fans are encouraged to act quickly to secure their tickets to this special concert event!