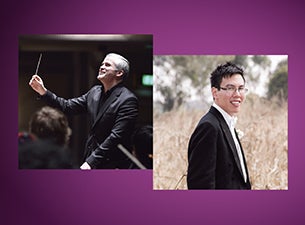 Beethoven’s Third Piano Concerto, written in 1801, is described as a masterpiece.  It reveals the development of emotional impact and intellectual depth in his music which evolved after his deafness began in 1796.

John Chen is a Malaysian-born New Zealand concert pianist, and in 2004 he became the youngest-ever winner of the Sydney International Piano Competition.  After finishing his studies in Auckland, he continued in the USA, and his career now takes him to all corners of the world.

As well as celebrating 250 years since Beethoven’s birth, this concert also celebrates the 60th birthday of the Dunedin-based composer Anthony Ritchie who has been hailed as “one of the greatest composers of his time”.  His first symphony was composed in 1993 while he was the DSO’s Composer In Residence.  The DSO is delighted to mark this milestone for a composer with whom our relationship has flourished, especially as May is New Zealand’s Music Month.

DSO Concert Series 2020 - First two concerts postponed Following the Government’s directive banning public events of 500 or more people, and out of concern for the health of those involved, the Dunedin Symphony Orchestra has decided to postpone its 4 April and 2 May concerts until September and October this year.  These concerts will replace the ‘Beethoven’s Big Birthday Bash’ on 19 September and the Halloween Concert on 31 October, and the DSO will be looking into how to present those projects on other dates instead, possibly in different formats.

The DSO intends to keep the 4 April and 2 May artists and repertoire intact as far as is possible, but its ability to do that will depend on the availability of these artists. Once conductors and soloists are finalised, we will be able to advise who the artists are and what the repertoire will be for the 19 September and 31 October dates.

At that point, the DSO will be in touch with International Series and Flexi-Ticket subscribers and sponsors to discuss the next steps.

Regarding future concerts, the DSO will be monitoring developments as they occur.  In particular, regarding the first Matinee Series  performances on Saturday 6 and Sunday 7 June, a decision as to whether or not these can proceed as planned will be announced on or before Friday 8 May.

We will be communicating any updates or changes with our audiences, artists and stakeholders appropriately as changes occur, and will be posting updates on the DSO website and DSO Facebook page.

The DSO appreciates your understanding and support in these unprecedented times.