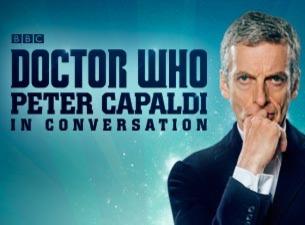 About Doctor Who - Peter Capaldi In Conversation

Peter Capaldi in Conversation is a special one-time-only Doctor Who event, hosted by Adam Spencer, in which Peter will reveal how he approaches the role of the Doctor, with footage and stories from behind the scenes of the world’s longest running sci-fi television series.

He’ll take questions from the audience and give them an insight into what life is like inside the TARDIS. As well as discussing the unique perspective he brings to the role of the Doctor, a style that is direct, humorous and increasingly vulnerable, Peter will also share some of the adventures he’s had both in his role as the Doctor and throughout his career.

This will be the first time ever a current Doctor has visited New Zealand and, with a limited number of seats available, fans are advised to purchase their tickets early to avoid missing out.

Peter Capaldi in Conversation takes place at the Civic Theatre, Auckland for one night only on Tuesday 24th November 2015.