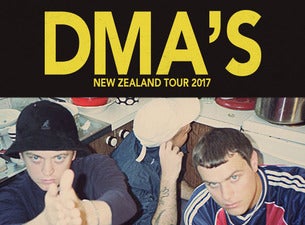 The Sydneysiders have barely had time to breathe since releasing their debut LP Hills End in February 2016. They’ve crisscrossed the globe playing more than 100 festivals and headline shows across Europe, the USA and back in Australia. Making a detour to New Zealand last January for St Jerome’s Laneway Festival, DMA’S delighted the mainstage crowd as they belted out their singalong hit ‘Delete’ in the sunshine.

DMA’S are rarely back downunder with their Britpop inspired sound, seeing them return to the UK and Europe for tour-after-tour at ever-bigger venues. There’s more good news for fans – DMA’s have been back in the studio. Although no date has been announced for their sophomore album, we can expect some new music to surface when they cross the Tasman to visit us in October.

“…the euphoria they evoke at this packed show is undeniably special.” – NME

“‘Delete’ is a particular highlight. The song is the centrepiece for DMA’S, it’s the hands in the air/ arms round your friends moment of the night.” - The Yorker