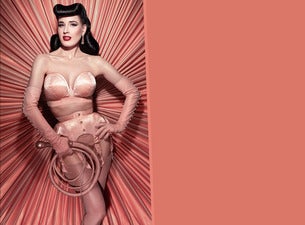 The ever-dazzling International Queen of Burlesque, Dita Von Teese, is set to visit New Zealand for the very first time this December where she will debut the most lavish touring burlesque show in history – her all-new revue DITA VON TEESE: GLAMONATRIX.

The 2019 tour marks Dita’s first visit to New Zealand and follows two sold out Australian runs in the past four years. Von Teese’s 2018 “The Art of the Teese” is the most successful burlesque tour of all time and played to sold out theatres in cities across the world. It was a triumphant introduction of her full-length revue to Europe, selling out five nights at The London Palladium and counting the Royals amongst attendees at the Opera Garnier in Monaco.

Fans can expect a full evening of comedy and sophisticated striptease that celebrates diverse beauty. Far from being a typical burlesque show, Dita elevates and modernizes the classic 1940’s variety show, with both male and female forms glorified in a body-positive way that inspires and uplifts.

Always ahead of the curve, Dita’s casting has consistently been inclusive, diverse, and multi-faceted, showcasing the talents of male, female, and gender-fluid performers from around the world to create a body-positive, celebratory show like no other.

As the consummate performer in modern burlesque, Von Teese’s exhilarating live shows are world-renowned and draw fans from every corner of the globe. With over one million tickets sold, and an unprecedented quality of production in burlesque, it is clear why Von Teese’s self-produced tours are the gold standard of the modern burlesque revival.

“With a fan club that includes Marc Jacobs, Elton John, and Christian Louboutin, Dita Von Teese is giving burlesque a sweetly seductive second life, and more than a touch of class.” - Vanity Fair

“The past lives in the present….magical!” -Steven Spielberg