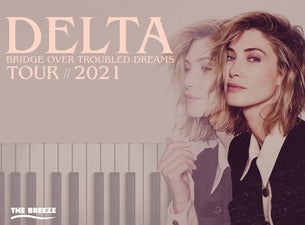 Australia’s very own superstar, singer-songwriter Delta Goodrem is set to embark on her long-awaited headline shows in April 2021 for the Bridge Over Troubled Dreams Tour. Delta has achieved multi-platinum selling status with nine #1 singles, four #1 albums, 16 ARIA Awards and three World Music Awards.  Her last highly successful arena tour broke records as Delta became the highest-selling female Australian touring artist in 2016. With hits including “Born To Try”, “Sitting On Top Of The World”, “Wings” and her new single “Keep Climbing”, the chart-topping superstar is set to play unforgettable shows around New Zealand with $1 (plus GST) per ticket sold will be donated to the Delta Goodrem Foundation, featuring all of the hits from one of Australia’s favourite entertainers - the stunning Delta Goodrem.

In the event of a cancellation, exchanges and refunds will be processed according to AU/NZ consumer law.